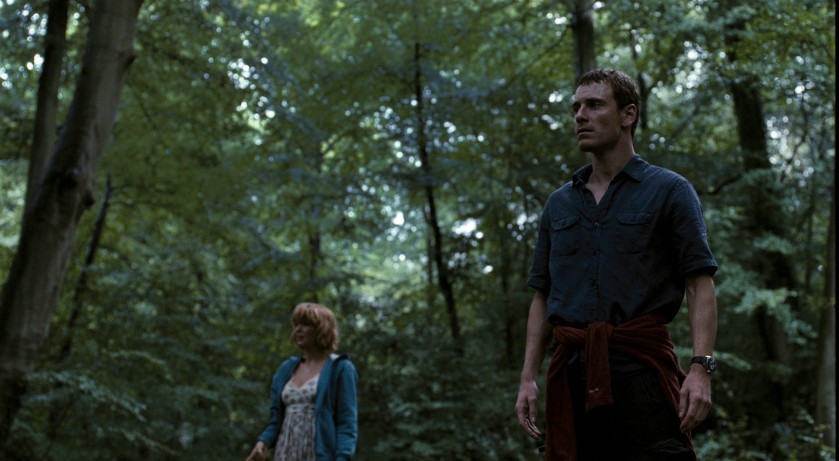 Eden Lake is 90 minutes of cruelty with genre tropes that obscure any intelligent commentary.

With an 83% rating on Rotten Tomatoes and claims that it is ‘thought provoking’, one would expect Eden Lake to be cut above Hostel, Saw and other torture films that appear comparable. While it may be superior to a certain degree, it remains a decidedly shallow film that is too constrained by the tropes of its horror genre framework to be taken seriously.

The film follows Jenny (Kelly Reilly) and Steve (Michael Fassbender), a young couple who retreat to the Midlands countryside for a romantic break. As the couple drive north of London, there is an ominous radio discussion about the state of education and the perceived animosity brewing between the young and the old, assembling its themes of ‘Broken Britain’ in a manner that is perhaps slightly obvious.

After several disconcerting encounters with some obnoxious locals, the pair set up camp on the sandy banks of a flooded quarry. Their tranquility is soon interrupted by a chavvy young horde of Daily Mail proportions, led by the psychopathically aggressive Brett (Jack O’Connell). The conflict begins with general boorish behaviour and a wayward Rottweiler, and feeling the weight of his masculine responsibilities, Steve approaches the group and politely asks them to behave themselves. His reasonability is spurned and the couple are soon fighting for their lives in what is effectively their attackers’ back yard.

Many barbarous things have happened when the aggressive and the controlling have attracted the meek and the impressionable. The first example that springs to mind is the 1993 abduction and murder of toddler James Bulger by two ten-year-olds, Robert Thompson and Jon Venables. The pair’s twisted crescendo of rebellion began with truancy and shoplifting, which led to the idea of abducting a child and pushing it into the path of an oncoming car, which finally led to James’s abduction from the Bootle Strand shopping centre and his brutally protracted murder on train tracks by Anfield Park. The two boys enabled and normalised each other’s behaviour, and the roles of ringleader and minion became quite clear in police interviews.

Once arrested and interrogated by officers, Jon Venables was wrought with intense fear and remorse. He confessed to the killing, but was unable to tell the part of the story that he ominously called ‘the worst bit’. Conversely, Robert Thompson, described as ‘street wise way above the age of ten’, was hostile, dishonest and unrepentant. Thompson and Venables had a typical dynamic that became horribly toxic over a day’s truancy; it could inspire darkly compelling material for either print or cinema, providing it was created with intelligence and sensitivity.

Eden Lake could have been this film. It could have been a mature and intelligent insight into senseless violence and the nihilistic, ignorant, vulnerable people who commonly commit it; a film in a similar vein to A Short Film About Killing or Boy A. Instead, the viewer gets a tropey horror film that focuses on neither the group nor the couple in a meaningful way. The film’s main concern is brutality, such as showing us what it looks like when a Stanley knife is forcibly entered into someone’s mouth.

Despite Eden Lake‘s themes of class and age divide being highly superficial, political commentators have made the film fit their agendas. Owen Jones, one of The Guardian‘s most prominent PC enthusiasts, wrote the following in his book Chavs: ‘Here was a film arguing that the middle classes could no longer live alongside the quasi-bestial lower orders.’ Like many who are preoccupied with ideology and prone to knee jerk reactions, Jones mistakenly believes that the portrayal of one group of teenagers is supposed to be representative of an entire social group comprising millions of people.

With good performances and uncompromising brutality, Eden Lake grips and shakes its audience quite effectively. However, it is mere viscera rather than political commentary, sharing more in common with The Last House on the Left than A Clockwork Orange. 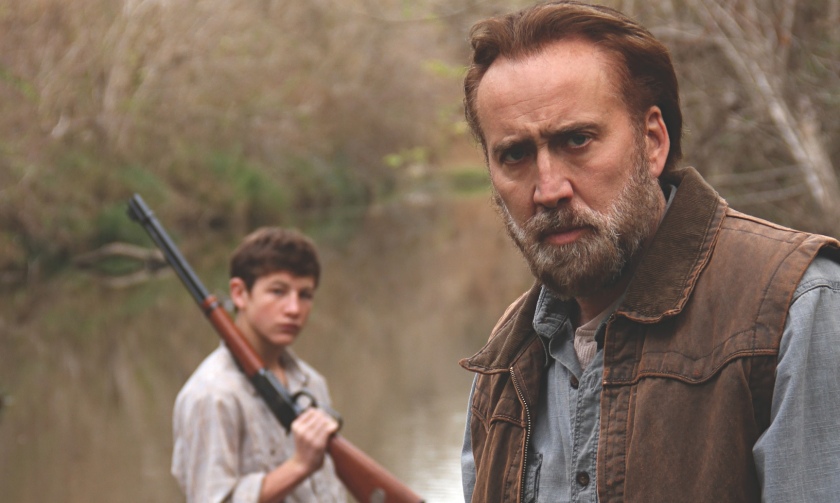 Nicolas Cage disappears into his role as the titular Joe in a film that’s thematically rather familiar but also a surprisingly realist piece of cinema.

The film follows the principal characters Joe (Nicolas Cage) and Gary (Tye Sheridan). Gary is the only member of his degenerate family who is able to work and earn a living; he has been forced to become a responsible person by his vile, repulsive father Wade (Gary Poulter), a man who has abused his body so much and for so long that he can only speak in slurred, incoherent ramblings. I recently compiled a list of the 10 most hateful characters of cinema; I think Wade could quite easily be placed in it.

Joe is a recidivist who is haunted by his criminal history and continues to struggle with controlling his anger, it seems the only way he can stay out of trouble is by absorbing himself in his small landscaping company.

Joe leads a group of black workers, they clear wooded areas with these rather strange axes that waywardly squirt poison everywhere. Joe and Gary are brought together when the boy implores him to employ both himself and his father. Joe obliges and Gary proves to be a good worker, although the agreement is soon thwarted by his obnoxious father who is too polluted, weak and lazy to contribute to the team.

The cast of Joe’s workers and indeed the whole film is populated with actors who were seemingly taken from the street, their performances are completely natural and their language raw, colloquial and as a result sometimes completely incomprehensible! A few times I felt like an American watching Trainspotting, particularly during a row between the moronic Wade and a black worker, whose ebonics is the strongest I’ve ever heard.

Joe is a tough watch, there are characters that represent the very lowest form of human life, there’s seldom a room in the film that isn’t a filthy, cluttered mess. I didn’t expect it to be such a realist piece of cinema, its depiction of blue collar work and young Gary’s first foray into it is sure to resonate with anyone who’s had similar experiences, myself included.

Nicolas Cage doesn’t stick out at all, he effortlessly blends in with the surrounding cast of largely unknown actors. Like Leaving Las Vegas, Joe is an example of Cage moderating his idiosyncratic acting, which I like incidentally, and showcasing just how good he is.

Clear correlations can be made with Mud, a similarly themed film about a benevolent renegade forming a bond with Tye Sheridan’s conflicted teenage boy. Joe is the superior of the pair, although Mud boasted good performances from its leads, it was melodramatic and overrated. Tye Sheridan’s character Ellis in Mud, who is given far too much screen time, thought about love and human relationships in ways that 14-year-old boys just don’t – I didn’t believe in him. He also had a habit of vehemently punching people in the face that belied his prepubescent little frame. Joe’s Gary is a much better character, a measured boy who simply wants to make a living and prove to the men in his life that he’s no kid.

Mud lacked Joe’s gritty nastiness, it had treacly melodrama instead of stark reality. What they do share is the running theme of redemption, and in the case of Joe, I found its conclusion rather familiar and subsequently bathetic. Despite this, Joe succeeds in absorbing you in its masculine world and Nicolas Cage defies any naysayers by completely disappearing into his role as the titular rogue.

A timeless film about young adulthood.

Albert Finney drives this film with his brilliant performance as Arthur Seaton, an angry young factory worker from Nottingham who lives for the weekend.

His infectious appetite for trouble has developed a reputation for being a rogue in the terraces and ginnels of his neighbourhood. He likes the ladies, and although there are plenty of single women out there for him, he chooses to sleep with Brenda (Rachel Roberts), the wife of his workmate Jack (Bryan Pringle). A scene early in the film shows Arthur gleefully finishing breakfast at Brenda’s house when Jack is moments away from walking through the door. Arthur deliberately takes his time in escaping, relishing the close shave.

Opinionated and disaffected, Arthur enjoys regular rants with his close friend Bert (Norman Rossington) about the banality of the quiet life and how he has ‘fight’ in him. Although he dislikes authority figures and the local old bag who pokes her nose in everyone’s business, the enemy that he’s fighting isn’t a human, his enemy is conformity; the prospect of settling down and facing the daily grind makes him very anxious and fiery indeed.

This leads to an awful lot of troublemaking, which can be very funny. In one moment he loads his rudimentary pellet gun, quietly opens a window and shoots Mrs. Bull (Edna Morris), the aforementioned nosey cow, in her fat backside while she gossips. I laughed excitedly like a naughty adolescent as if I was really with Arthur, frightened of what the petty old hag was going to do. Inevitably, Arthur treads on some toes and he doesn’t always get away scot free, the gravest example of this being a fight scene that, unsurprisingly, is very dated. However, Arthur isn’t bothered by a tough fight, ‘It’s not the first time I’ve been in a losing fight, won’t be the last either I don’t spose… I’m a fighting pit prop who wants a pint of bitter, that’s me.’ During a fishing trip, his friend Bert asks the ranting Arthur ‘Where does all this fighting get you?’ It’s an important question and I don’t think Arthur is sure of the answer.

Arthur knows that he’s following the same well-trodden path as all the old farts around him and it seems he has an existential crisis every time he considers it, but he’ll probably soon mellow and learn to, in the words of Bert, ‘go on working and hope something good’ll turn up.’ Either that or move away and do something completely different, something that breaks away from his area’s cyclical nature that he detests so much.

Unlike so many romantic dramas and especially comedies, the film has a romance that you genuinely care about. Arthur meets the lovely Doreen (Shirley Anne Field), a beautiful, measured and reserved woman who keeps Arthur’s charm at bay, which entices him even further. You hope that the angsty, impetuous Arthur won’t squander his chances of a good relationship with a good woman.