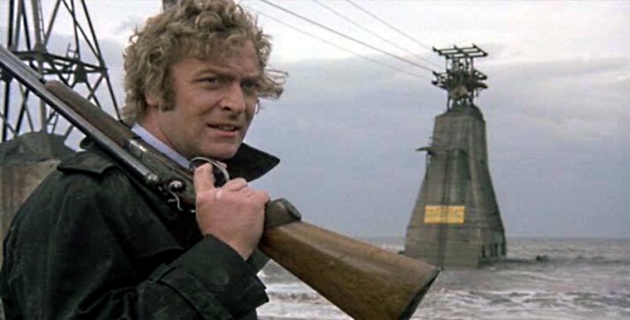 ‘Get Carter’ is certainly an icon of British miserablism, however my most recent rewatching left me unimpressed.

I love British films of the 60s and 70s. Everything’s very grey and very brown and the characters are thoroughly downbeat and pessimistic; there’s also vile patterned wallpaper everywhere.  The visceral kitchen sink drama is a British trademark that can still be found in later films such as Gary Oldman’s ‘Nil by Mouth’ (1997) and Paddy Considine’s ‘Tyrannosaur’ (2011).

‘Get Carter’ is an icon of British miserablism, I first saw the film on TV when I was quite young, I liked it. I’ve had it on DVD for years and always regarded it as a nasty, hard hitting classic. However, after watching it again in 2013, I was left rather deflated.

There’s no doubt that it continues to be drab and nasty. The abject horror of 60s architecture can be seen throughout the film; I think the brutalist architects of the 50s and 60s did more damage to our landscape than the Luftwaffe. ‘Carter’ really corroborates the saying ‘It’s grim up north’, as the film’s great climax shows that even the beaches can’t escape the polluted, achromatic hell of the city. (I’m pleased to see that the beach has since been completely cleaned up)

Despite this, the problem at its core is simply age, it has dated badly. The violence has no punch, quite literally; the choreography of Caine’s beat-downs on various enemies is unconvincing and in some instances just risible. The worst example of this is when Carter manages to catch someone’s fist and slap him round the face in a scene that is horrendously edited. There’s also a moment where he lunges towards a woman (who cannot act) in a café and wraps his hand around her throat in a highly orchestrated fashion.

All of this amateurism is exacerbated by how, in this film at least, Michael Caine is not an intimidating figure. In ‘The Long Good Friday’ (1980), Bob Hoskins is short, stocky and has a very bad temper, however Caine, whilst cool and moody, is rather lanky and weak.

The script is also dated, it’s all ‘bloody’ this and ‘you’re a git’ that. While there’s no doubt that the British have an affinity for such words, it felt like the script was under the gaze of Mary Whitehouse (Well, someone more lenient actually, the ridiculous Whitehouse would even object to the lexicon of Get Carter)

Aside from its age, I also found the story weak. It is basic, which can be great, however as the characters and their relationships are so unremarkable, Carter’s straightforward revenge narrative suffers. I didn’t particularly care for Carter and his cause, he’s a blandly nasty character meting out justice to other equally flat characters.

Caine is fine as Jack Carter; he has moments of great anger, especially in an emotional outpour in the film’s final minutes. Outside of these moments however is a rather standard hard man stock character performance.

While ‘Get Carter’ is still bleak and perhaps captures the zeitgeist of 70s working class Britain, it is rather dramatically unaffecting. After years of thinking it was a great film, I was left unimpressed by its lack of character development, its collection of poor supporting performances and its dated action and script. The shocking climax on that foul, polluted beach and Roy Budd’s fantastic score are still high points, though.