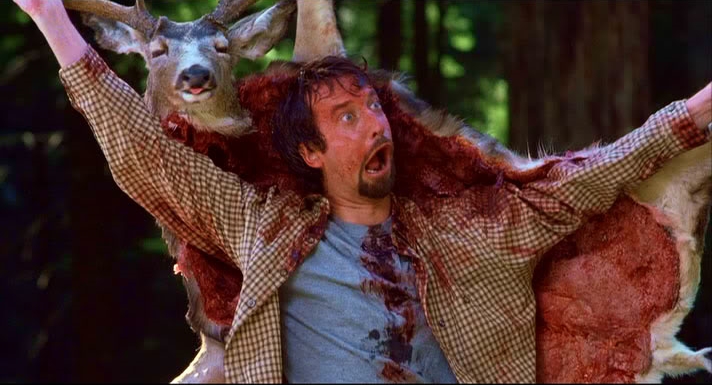 Tom Green spends much of the film with his mouth wide open and shouting dementedly.

Much funnier than Jennifer Aniston.

And Adam Sandler and Kevin James and Rob Schneider and the scores of other popular entertainers who permeate Hollywood. Of course, these people are generally not critics’ darlings, however few if any of their hackneyed, horribly successful films have received the reception that Tom Green’s Freddy Got Fingered did in 2001. Roger Ebert no less was one of its most savage attackers, writing emphatically how it didn’t ‘scrape the bottom of the barrel’ and that it didn’t even ‘deserve to be mentioned in the same sentence with barrels’.

It is indeed a very polarising film; I concede that it’s just an immature indulgence from Tom Green, but at least it’s not a load of recycled tedium. It’s quite remarkable that this film was financed at all, let alone by 20th Century Fox. What’s even more surprising is that this is very much Tom Green’s film, no executives interfered in the creative process; it is, for better or worse, the work of an auteur.

The film focuses on Gord Brody, a 28-year-old animator/slacker living in his parents’ basement. In the film’s opening moments, Gord is seen strewn across his bed completely supine as he narrates one of his draft animations like a blithering idiot. He soon gets a job in a Los Angeles cheese sandwich factory while he tries to sell his work to an important animation executive.

Green has an irreverent, dark and extreme sense of humour that he releases through his character Gord in a series of outrageous set pieces, most of which begin with or entirely comprise him shouting maniacally. It is Green’s unhinged lunacy that makes the film so… different. Highlights include him violently handbrake turning as he is bowled over by the sight of a horse’s penis, his horrifying misinterpretation of an advertising executive’s advice, his impersonation of an obnoxious stock broker during a dinner with his new girlfriend and the many altercations with his father Jim (Rip Torn).

Rip Torn’s performance is a highlight of the film, he is brilliantly cantankerous and frequently clashes with his son, he is the perfect adversary for Green’s proverbial slacker. He shows, quite understandably, no faith whatsoever in what he calls Gord’s ‘doodles’.

I’ve personally always had a fondness for Freddy Got Fingered. Even for its admirers, it can indeed be a tough, tiring watch from beginning to end, I think it largely depends on what mood you’re in. Once the viewer has endured what has become quite an infamous 1 hour and 23 minutes, it is a film that’s best revisited as separate puerile set pieces rather than as a full narrative.

But however you watch it, whether its by yourself with a cup of Earl Grey or with friends and much alcohol (a recommended method), it will ultimately always be funnier than Adam Sandler.