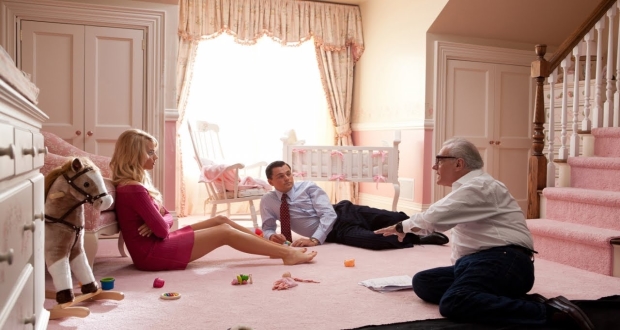 This film is not a glorification, it’s an observer rather than a judge.

The Wolf of Wall Street is a rather straight forward rise and fall story, it’s Scarface with even more excess but without the M16 with an underslung M303 grenade launcher.

Some have said that this film is a glorification rather than a satire, a three hour parade celebrating Jordan Belfort’s excess instead of a stern condemnation. Despite all the drugs, decadence and vulvas in the film, I don’t think the film glorifies him, and I don’t think it’s a biting satire either.

The film is an observer rather than a judge; it displays Belfort and his minions’ debauchery in a grand three-hour narrative with the energy and gusto of GoodFellas, letting the audience decide what they think of it all. If one leaves the theatre impressed or inspired by Belfort, that’s very much a reflection of them rather than the film.

There is a lot of bad behaviour going on in The Wolf of Wall Street, understandably too much for some people, but over the course of three hours I didn’t find it exasperating like some have. In fact, I think one would possess a certain amount of sanctimony to deny that there isn’t a degree of allure to Belfort’s lifestyle; an element of excess should be everyone’s life, whether it’s occasionally ordering the most expensive thing on the menu or at some point in your life owning a car that does 20 miles to the gallon, just because it makes you feel good.

Of course, that wouldn’t begin to be enough for Jordan Belfort. His ideas on money, relationships and life in general were quite awful during his years at the helm of Stratton Oakmont, his company that employed the ‘pump and dump’ scheme to rob scores of investors of their money. It is Belfort’s obsession with wealth, material goods and just winning that makes him quite a one-dimensionally unpleasant character. The nature of the character made me question the casting of Leonardo DiCaprio.

This is not to say DiCaprio is in bad form here, his performance is teeming with conviction. Leo is in his element during Belfort’s rousing, maniacal speeches to his employees; his frenetic energy reminded me of Evangelical preachers found in the southern states. Of course, there’s nothing remotely Christian to be found in Belfort’s fervent rhetoric, only sentences of remarkable crassness, immaturity and myopia – ‘Does your girlfriend think you’re a fucking worthless loser, good! Pick up the phone and start dialling! I want you to deal with your problems by becoming rich!’ – ‘If anyone here thinks I’m superficial or materialistic, go get a job in fucking McDonald’s because that’s where you fucking belong.’

Despite DiCaprio’s committed performance, I’m not part of the indignant crowd who demand that he finally win the Oscar for best leading man, particularly with this year’s nominations. He’s had a great career so far, he’s worked with Hollywood’s most revered artists and has had a consistent stream good roles.  Although his performances regularly display his great dramatic range, the problem is his huge Hollywood profile means that I feel like I’m watching Leonardo DiCaprio rather than the character he is portraying. It’s the same with The Wolf of Wall Street, Leo is just too cute and popular to play someone like Jordan Belfort – the casting gives a certain amount of sheen to him. Also, DiCaprio didn’t adopt Belfort’s New York accent, which is a pity because Leo’s South African accent in Blood Diamond was impressive.

While there are flashes of gross vulgarity in DiCaprio’s performance, the real Jordan Belfort is worse. To his credit, he is a naturally adroit salesman, he ran a successful meat business in his early twenties, he could’ve probably made a substantial legitimate living with his innate entrepreneurialism. However he didn’t, and now he remarks in interviews and speeches that ‘making money is easy’, what he forgot to add is ‘…when you broke the law like I did’. I’m not preaching here, I’m just reminding the crowds he draws to his motivational speeches that this man’s immense wealth hinged completely and utterly on criminality.

The other reason why Scorsese’s Belfort isn’t hateful enough is because the repercussions and victims of Stratton Oakmont are never shown, and to give a properly three-dimensional depiction of Belfort’s story, they should have been. Scorsese and writer Terence Winter have followed Belfort’s memoir so closely that it’s quite a one-track narrative, perhaps they could have stepped back from the book and explored the extent of Stratton Oakmont’s damage.

So, it is clear that there isn’t a particularly complex figure at the centre of Martin Scorsese’s latest film, but that certainly doesn’t mean it’s a misfire. This is more ‘Casino’/’The Departed’ Scorsese rather than ‘Taxi Driver’/’Goodfellas’/’Raging Bull’ Scorsese.

Although the one-dimensional central character and its limited perspective means it is not Scorsese’s best film, The Wolf of Wall Street is an engrossing, sweeping rise and fall tale that is vibrant, funny and very striking.