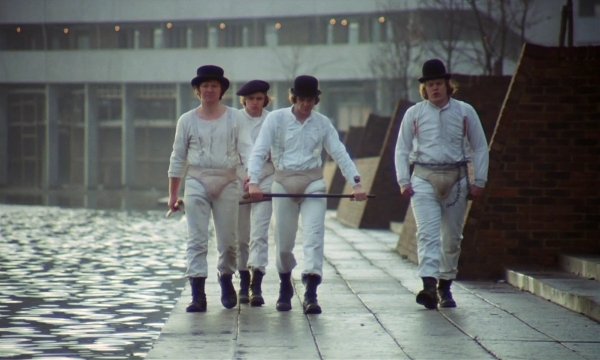 That iconic wide shot of the flatblock marina.

‘A Clockwork Orange’ is a deranged piece of required viewing that has entered the annals of popular culture.

I distinctly remember the first time I watched ‘A Clockwork Orange’. I was only 11-years-old and it was a rainy, overcast afternoon – perfect conditions for watching a film. I was aware of the film’s notoriety; I remembered my dad’s excitement when he managed to find a copy of it in France in the late 1990s, telling me that it had been banned by the director in our country.

Stanley Kubrick died in 1999, and sometime between then and 2004 a newly released English copy had been bought, presumably by my dad. With a certain degree of espionage, I managed to find the VHS and slip it into my all-in-one television and VCR player.

As soon as the stark red and blue colouring of the opening scene flooded the screen, I was captivated. The strange aesthetic and Wendy Carlos’ haunting Moog synthesiser soundtrack was unlike anything I had ever seen, I was utterly compelled by it and I knew I was watching something really special.

The film follows Alex and his three ‘Droogs’, a gang of amoral young men who spend their evenings beating, stealing and raping. Since my initial viewing all those years ago, I have realised that it was the terrific energy of the film’s first hour or so that gripped me as an 11-year-old boy. Yes, you’re watching the Droogs ‘tolchock’ and rape, however Alex’s completely unhinged life unravels on the screen with such vitality; it’s a thrillingly deranged trip that swiftly grabs and immerses its viewer like few films manage.

There is no other film that is quite like ‘A Clockwork Orange’. It is riddled with idiosyncrasies, with its gaudy costumes, futuristic interior design and particularly ‘Nadsat’, the Droogs’ esoteric language, some of which has since entered common parlance. It is also a film that truly feels British, particularly in its humour, which comes chiefly through the comments and sometimes rather slapstick actions of the eccentric central character. One of its foremost merits lies in Wendy Carlos’ wonderful score. It blends classical pieces such as Rossini’s The Thieving Magpie and Beethoven’s Ninth Symphony with Carlos’ Moog synthesiser renditions of  Beethoven and Baroque music including Henry Purcell’s March.

There’s no doubt that the film aestheticises violence and indeed glorifies the central character Alex DeLarge. Malcolm McDowell gives Alex an undeniable charisma that charms you, making him an antihero that you find yourself very much rooting for. During all of his nastiness he is never hateful, not in the slightest; he has that infamous sideways grin that’s menacing and amusing in equal measure. I consider McDowell’s iconic, oddball performance to be one of cinema’s greatest.

All of this, of course, poses something of a moral dilemma. As the film progresses, our charismatic antihero who has both charmed us and appalled us finds himself up against the government. What ensues appears to be somewhat dubious and confused in its stance and meaning.

Some may think the film advocates delinquency, but I disagree. The key to the film’s success is that it doesn’t give any definite answers; instead, it explores the complexities and difficulties of crime and punishment, presenting us with this dystopian vision of sheer state control. While Alex is certainly a great character, those who idolise him are far too impressionable to be watching the film.

‘A Clockwork Orange’ is a spectacular synthesis of absurd aesthetic, striking cinematography, innovative music and an exceptional lead actor supported by a strong, interesting cast. It is a piece of required viewing that’s entered the annals of popular culture. 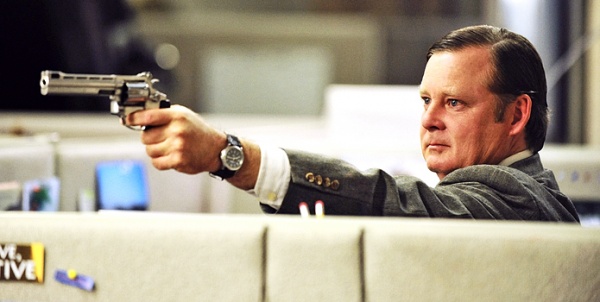 The lead character is boringly cynical, stewing too much in self-pity.

‘God Bless America’ is a preachy, irritating film that ultimately failed to resonate with me. I regularly shared the sentiment of the film’s protagonist, I too hate the culture the film attacks, but he’s so tiringly cynical and grumpy that he loses pathos and becomes difficult to relate to. Though he is articulate, Frank (Joel Murray) started to remind me of the generalising fools with chips on their shoulders who smugly moan on and on about standards of education and the justice system as if they know what they’re talking about. While Frank was generally far more correct than people of this ilk, his unadulterated negativity meant that partial comparison became unavoidable.

So almost immediately, there was a big problem, but then it got worse, the film’s credibility sank upon the arrival of Roxy (Tara Lynee Barr), Frank’s annoying little side-kick. Their ensuing double act killed it – it’s just fantastical and silly. Though the film taps into your pet hates and everyday annoyances, its lack of reality means that it isn’t half as effective as ‘Falling Down’, which while it is rather manipulative manages to resonate through being funny, tragic, satiating and for the most part, realistic.

It is Roxy that places ‘God Save America’ alongside the awful pseudo-superhero film ‘Super’, but thankfully Tara Lynne Barr’s acting isn’t as unbearably irritating as Ellen Page’s.

There’s also a moment that copies the gun salesman scene in ‘Taxi Driver’ almost verbatim, something that I found more of an offence than some sort of homage.

A merit would be that some of the slayings are indeed quite funny in their brutality, especially one concerning a vile creature from those awful ‘Super Sweet 16’ programmes. Ultimately, the film unfortunately loses the steam it mustered in its opening.