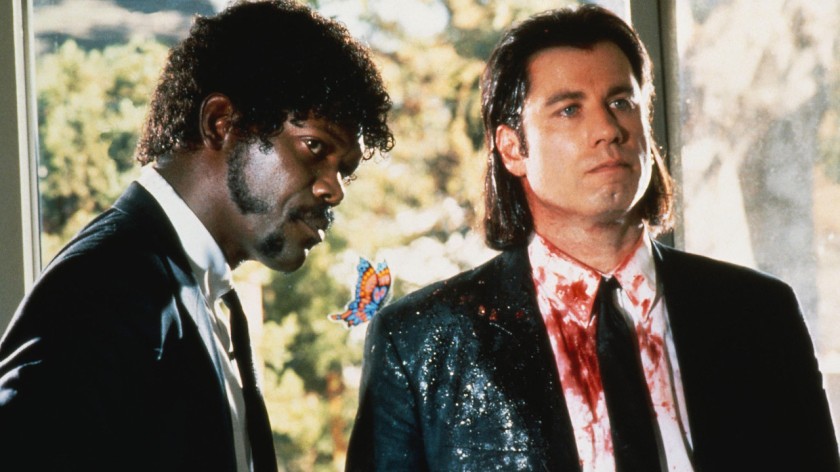 Pulp Fiction is a film with few flaws particularly worth mentioning. Since its release in 1994, the film has become a modern classic. The film’s non-linear narrative leaps backwards and forwards in the characters’ shared experience, engaging you in such a way that you begin to run through your head the chronology of the characters’ stories, making sense of Tarantino and Avary’s complex script. This complexity makes Pulp Fiction easily re-watchable. I have seen it many times, and recently I was lucky enough to catch a screening at the Duke of York’s Picturehouse in Brighton, which was an experience that reminded me of how special this film is.

‘Pulp Fiction’ explores the following principal characters: Vincent Vega and Jules Winnfield, a pair of loquacious hit men who appear to exist in a style vacuum; Butch Coolidge, an ageing but courageous prize fighter; Marsellus Wallace, a seemingly omnipotent mobster and Mia Wallace, the flirtatious wife of Mr. Wallace whom Vincent Vega is assigned to take out to dinner. The characters’ stories famously clash with each other, regularly to chaotic and hilarious effect. Tarantino is yet to return to this kind of form.

After ‘Jackie Brown’ in 1998, he spent time making the entertaining but comparably meagre ‘Kill Bill’ films, which were well orchestrated viscera, but ultimately below him. He then made ‘Death Proof’, which was an offensively bad, juvenile piece of work with a script of unprecedented annoyance. However, Tarantino made a comeback with ‘Inglourious Basterds’, which had a rather appealing premise and many memorable scenes. 2013 sees the launch of ‘Django Unchained’, which, with its ensemble cast and inevitable flair, is one of the most exciting films of the year.

‘Pulp Fiction’ has all the components of a classic, it has the scope and the quality. It is the favourite film of many people, achieving a popularity similar to other classic crime films like The Godfather and Goodfellas, films that are firmly considered as ‘required viewing’.