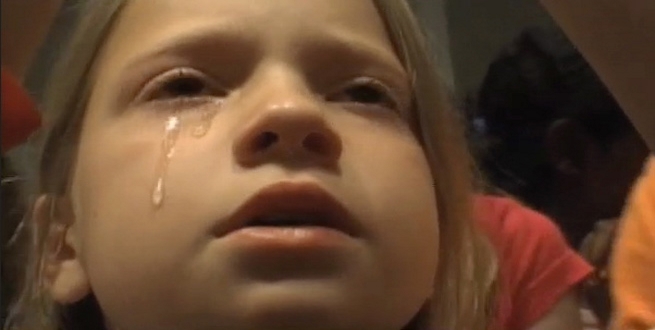 I objected to so much in Jesus Camp that it’s hard to know where to begin.

Jesus Camp follows a group of children as they’re indoctrinated by fundamentalist Christians at a summer camp;  it is a documentary that leaves one both angry and incredulous.

At the centre of it is Becky Fischer, a fat, obnoxious egotist who serves as the main speaker at the camp. We see Fischer preaching emphatically to these young minds, permeating their innocence with fear and guilt until they cry hysterically. So ridiculous and damn risible is her fanaticism that she even lambasts Harry Potter, spouting that ‘Warlocks are enemies of God! Had it been in the Old Testament Harry Potter would have been put to death! You don’t make heroes out of warlocks!’ – clearly, a religion of peace.

What is happening here is not religion, it’s child abuse. The children aren’t given the opportunity to think for themselves, they are inundated and imbued with bigotry, absurd reactionary values and a completely zealous devotion to God. Fischer and her creepy minions are quite open about what they’re doing, she even refers to it as ‘indoctrination’ in one instance, but they see nothing wrong in it, in fact she even says – ‘I would like to see more children indoctrinated!’ When asked why she targets children, Fischer replies candidly and without shame – ‘The reason that we target kids is that whatever they learn by the time they’re 7, 8, 9 years old is pretty much there for the rest of their lives.’

Much of what you see is deplorable, however it truly passes a boundary when the indoctrinators use the language of violence, speaking of things such as ‘God’s army’, ‘fighting’ and ‘war’. After many children have been driven slightly mad by the suffocating mania of Fischer and her misfits, they are encouraged to manifest their religious zeal into violence by smashing mugs that represent all things satanic with a claw-hammer.

It’s this ‘God’s army’ mentality that produces the most disconcerting behaviour amongst the children. One child speaks of how she feels like a ‘warrior’ and that she’s at ‘peace’ with death; children should not be forced to contemplate their mortality like this. Her point is expanded upon by 12-year-old Levi – ‘you know a lot of people die for God and stuff and they’re not even afraid.’ If the political landscape of the United States was to descend somehow into bedlam, I could see this pernicious, extreme devotion to God becoming very violent indeed. They claim that their cause is purely spiritual, but that is nonsense, the real purpose of their dogma is to create a Evangelical overhaul of the government.

All of this incessant madness and irrationality is interrupted sporadically by Mike Papantino, the Christian co-host of radio programme Ring of Fire. The camera captures Papantino in his studio as he articulately despairs of these people, highlighting the alarming scale of the Evangelical movement and how this affects the democracy of the United States. Although I disagree with his religious views, Papantino reminds the viewer that there are normal people of faith out there that believe in the separation of church and state just like the founding fathers of their country.

Despite the input of Papantino, the documentary is, to its credit, largely impartial; directors Heidi Ewing and Rachel Grady just let the cameras roll on their unhinged subjects. To insert their presence into the documentary and make any judgement would be unnecessary. Ewing and Grady’s documentary offers an important insight that effortlessly captures the unnerving and dangerous Evangelical underbelly of the United States.