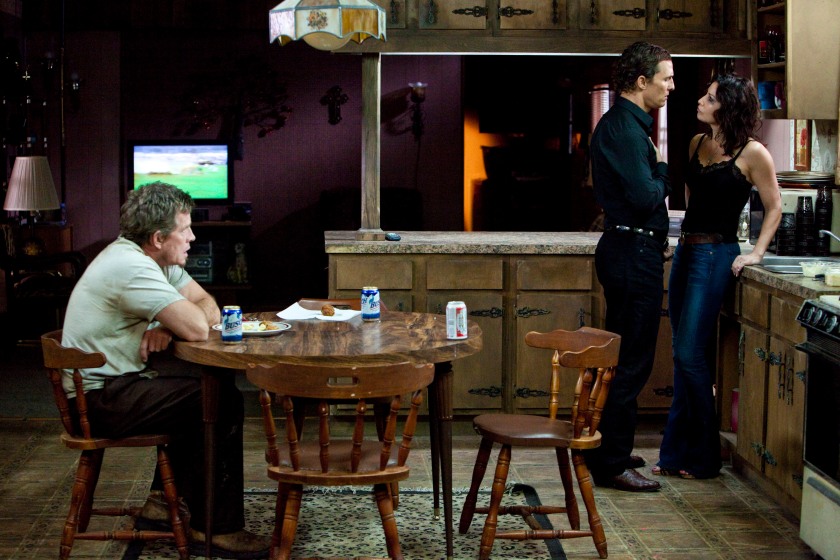 Some may be offended by it, but I think Killer Joe is the best film of 2012.

Killer Joe’s premise is simple but invigoratingly delivered. Chris Smith (Emile Hirsh) has got himself in trouble with the underworld, if he doesn’t produce some cash, he’s a dead man. He reasons with his father Ansel (Thomas Haden Church) that everyone would be happier if his obnoxious mother Adele was killed, particularly as she has a $50,000 life insurance policy. Considering Adele is his wretched ex-wife, he agrees, as does his girlfriend Sharla (Gina Gershon) and teenage daughter Dottie (Juno Temple). Although Chris doesn’t have the money up front, Killer Joe, a Dallas police officer who moonlights as a contract killer, accepts the job on the condition that Dottie serves as sexual collateral.

‘Killer Joe’ is a fantastic thriller with a warped tension that you don’t encounter that often. This film confirms that Matthew McConaughey is on a rapid upward trajectory, he gives an intense performance that’s utterly steeped in menace. Though ‘Killer’ Joe Cooper remains largely restrained and ambiguous throughout the film, each syllable of his southern drawl is loaded with a palpable danger. His performance is captivating; it creates a pervasive, looming sense of dread and depravity that suggests something very bad is going to happen at any moment.

The praise doesn’t stop with McConaughey, the whole cast delivers to the best of their ability, it really is an actors’ film. If I hadn’t researched her, I would have assumed on the credibility of her southern accent that the British Juno Temple was a Texas native.  She shows good dramatic range as Dottie, the slightly strange, child-like girl at the centre of the film.

William Friedkin has outdone himself with his second collaboration with writer Tracy Letts; he directs the taut, punchy material perfectly. What’s most refreshing is that 77-year-old Friedkin was bold enough to release it uncut with the dreaded NC-17 certificate; he wasn’t going to allow himself to sell out.

Seeing as the film’s source material is a stage play, it isn’t a film of many sets; it seldom leaves the confines of the Smith family’s trashy trailer. Much like their first collaboration ‘Bug’, ‘Killer Joe’ impressively manages to deliver biting tension and a maelstrom of chaos in a cramped, domestic setting.

I can honestly compliment every area of this film. Tyler Bates’ score is brilliantly suspenseful, especially when it introduces Killer Joe, it further adds to his aura of danger. The film is also beautifully shot – it’s stunning in high definition.

Despite the menace and darkness of it all, the film is laced with deadpan humour, especially in the film’s final quarter, the demented absurdity of which leaving you wondering what the hell just happened!

Jack Hawkins is a film writer for HeyUGuys, Rotten Tomatoes, Dirty Movies and more. He’s interested in films from every genre and every era, but his favourite work is often grounded in harsh realism with a visceral, transgressive edge. View all posts by hawkensian