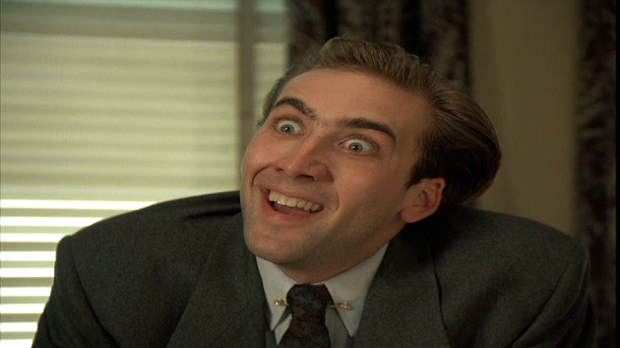 I found myself laughing at this unsung gem far more than I would at any conventional ‘comedy’.

Over the years, Nicolas Cage has developed a reputation for being a ‘paycheque actor’, the National Treasures, the Ghost Riders and the slew of others have, in the eyes of many, demeaned him as an actor. I can understand this, and agree to a certain extent, but Nicolas Cage is capable of many great things on the big screen, and Vampire’s Kiss, a genuinely peculiar piece of work, is a testament to that.

Cage occupies the role of Peter Loew, a womanising literary agent whose empty, high-pressure existence leads to a major mental breakdown. Peter is sent into a downward spiral of increasingly psychotic episodes, believing he is turning into a vampire after apparently being bitten by a rather more sinister one night stand.  As Peter crumbles under the grasp of his psychosis, he begins to antagonise his sweet secretary Alva, obsessively badgering her to fix a painfully daunting and monotonous filing issue.

Cage is at his unhinged best in this film; his rather idiosyncratic lunacy is perhaps an acquired taste, but I found it to be refreshingly hilarious. It’s a truly strange performance, there are many memorable outbursts that leave you rather incredulous, such as a scene of infantile crying that is quickly followed by Cage running down a street shouting ‘I’m a vampire! I’m a vampire!’. Aside from the various crazy eruptions, the inflections in Cage’s voice also have this comic air of pomposity – it’s futile to try and describe them, you have to hear them yourself.

With its yuppie-in-trouble story line, Vampire’s Kiss bears a striking resemblance to American Psycho, only it’s much stranger. The film charts the descent into madness, but it does it in such a surreal, eccentric manner that you don’t take it very seriously, it is indeed difficult to empathise with Peter. Some have said that this is a detriment of the film, but I don’t think it is; besides, I think the themes of unhappiness and unfulfillment do have a certain degree of poignancy. It is first and foremost a black comedy with an oddball central performance, not a grim piece of drama.

‘Vampire’s Kiss’ is likely to polarise audiences. I’m sure many viewers would find it plain silly, but I thoroughly enjoyed it, I’m very much part of its cult following. I found myself laughing far more than I would at any conventional ‘comedy’.